When the natural disasters up in mainland threatened our trip to Osaka last month, we decided to change our plans and check a different country off our "to visit" list. Last weekend, Matt and I did just that when we packed our bags and hopped on a direct China Airlines flight to Taiwan. Taiwan is an island right off the Ryukyu Islands, which Okinawa is a part of, so the flight to Taipei (their major city) was only an hour long - the perfect weekend trip!

When we landed, getting to our hotel was a small challenge, which, looking back, kind of set the tone for the whole trip! The airport is far outside the city - about a 50-60 minute bus ride. Once we exited the airport and somehow got on the correct bus, the bus dropped us off at one of the MRT (subway system) stations, where we had to quickly figure out the new transportation system in yet another city and get on the correct line in order to get off at the correct station. After managing to do this, we took off on foot (with suitcases rolling behind us - I packed light this time!) and headed toward our hotel. When it wasn't where GoogleMaps said it should be, we did a little work and found it by the actual address.

Instead of subway tickets, Taipei had subway coins 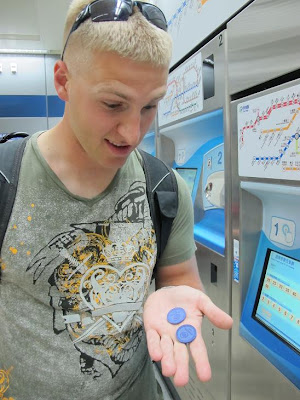 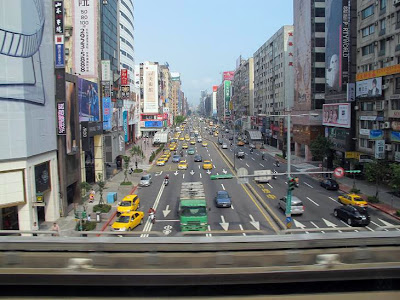 Our hotel in Taipei was called the Royal Biz Taipei and was located near the Zhongxio Xinsheng (just try and pronounce that one!) MRT station. It was definitely one of the best hotels I've stayed at so far, especially for the price of $85 a night! The hotel was clean, new and modern. The room was the same, with a large, comfy down bed, a large, sunken tub, a glass shower with a rainshower head (amazing!), and enough space to lay out our things and still have room to walk around freely (which is rare in Asian hotel rooms). And I haven't even mentioned the best part yet - the delicious buffet breakfast that they provided us with each morning! They had dozens of different options - about half of them were traditional western breakfast items, while the other half were a variety of eastern options. There were always new options each day we were there - herbed mushrooms, steamed potatoes, roasted tomatoes and garlic - as well as an omelet station. I looked forward to it each morning!

The bedroom in our hotel Royal Biz Taipei 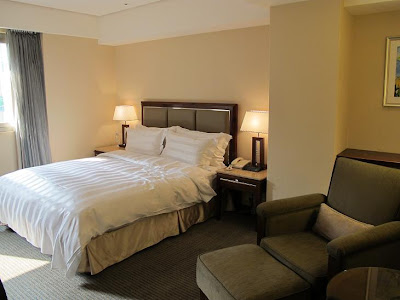 If there was one thing I learned growing up in Chicago, it was never to trust weather men. I was concerned when the weather ap on my iPhone showed it raining on all four days we were to be visiting, however, we were pleasantly surprised to discover the almost perfect sunny and 75 degree weather pretty much the whole trip. The first thing we discovered after stepping off the plane was just how much of a language barrier there was in Taiwan. Now, we aren't used to people speaking even decent English by any means, BUT I can definitely say that this was the most difficult time either of us has had (so far) communicating with locals in other countries. There were a couple reasons for this. First of all, the Mandarin language is a tonal language, meaning that if you say "hotel" in a low voice, and then say "hotel" in high-pitched voice, you would be saying two different words. Because English is not a tonal language, this makes it incredibly difficult for us to try to pronounce anything correctly. The only things most people or cab drivers understood were Chinese symbols, and unless you could show them something with Chinese symbols, they were completely lost. We would even ask "English??" to cab drivers, and they didn't even recognize the word "English"! Another reason Taiwanese people seemed to lack communication may also be due to the lack of English tourism in their country. I've never visited a country with less white people - I'm not exaggerating when I say that we maybe saw ten white people the whole trip. Every time we saw someone, we made sure to talk to them - we met people from California, Pennsylvania, Connecticut, all over the States.

Back to the language barrier... this made for quite the adventurous trip! We guessed where we were going and how to get there every time we went somewhere new, and because of our lack of communication with cab drivers, we pretty much took their MRT and walked everywhere! At first, the Taiwanese people came across to me slightly unfriendly - Matt even commented that none of them were smiling, which is a stark contrast to the friendly Japanese we are used to. However, as the trip progressed, my mind changed - although they didn't smile much, they were actually incredibly talkative. I've never been approached by so many people (the ones that did speak English, of course) asking us where we are from and how we like Taiwan. Matt says that you don't get to know a country without talking to the locals, and on this trip, we definitely got our share of talking with the locals!

Taipei is an old city, full of interesting and creative things. Here are a few interesting things we captured along the streets... 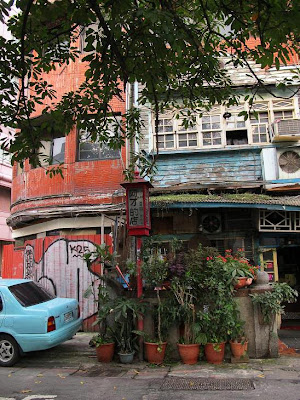 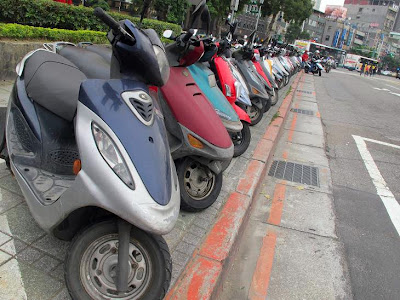 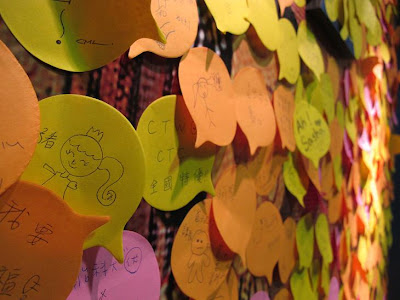 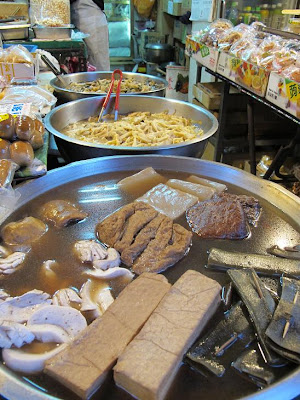 Check out this video we took of Taipei at night:

One of the first things we did after checking into our hotel was spend the afternoon and evening exploring Longshan Temple and the surrounding streets. Longshan Temple is one of Taipei's most important Buddhist temples, and one of the most popular tourist sites. I found it to be a little larger in size, but quite similar to the Buddhist temples we've visited elsewhere. After spending some time inside, watching the locals light incense in worship, Matt and I took to the streets, making our way to the famous Yong Kang Street in the Daan district of Taipei. Yong Kang is a lively street lined with all sorts of places to eat and shop, and we had to try one of Taiwan's famous dishes for dinner: Beef Noodles. The noodles come in a broth, similar to Ramen in Japan. However, they were very thick and doughy, and they had a slightly different taste. A little further down the street, we got to try one of the awesome Taiwanese desserts I had been hearing about - Shaved Ice - which is not like a sno-cone at all! Instead, the ice is shaved into soft strips that are so light and fluffy and melt in your mouth. The shaved ice is flavored and served in a very large bowl with fresh fruit on top. Although the portions were huge (there was a family of four seated next to us sharing ONE) Matt and I wanted different flavors, so we each ended up getting our own!


The gorgeous Longshan Temple from the front 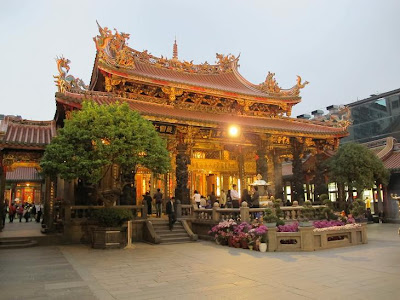 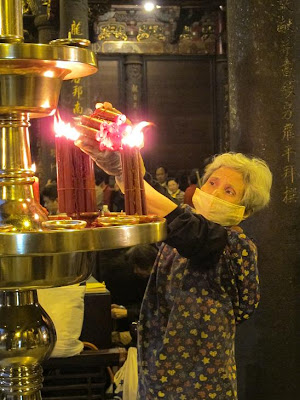 I LOVED these giant lanterns! 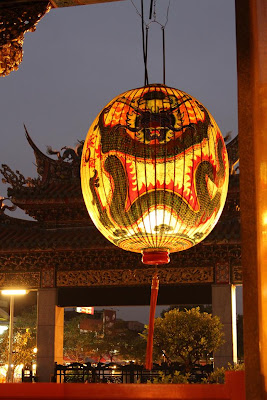 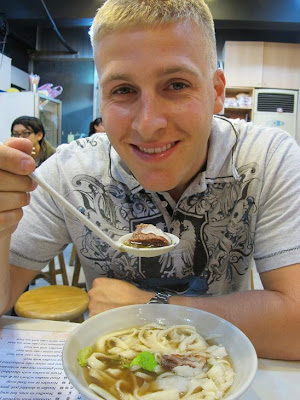 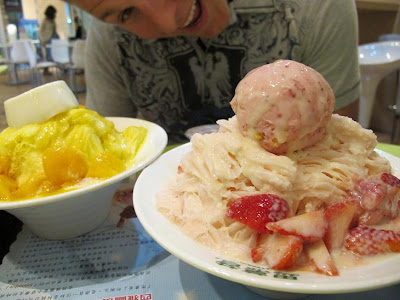 Yes, these old Taiwanese women are doing a dance routine in a random park to Lady Gaga!

More to come from Taiwan in the next post...