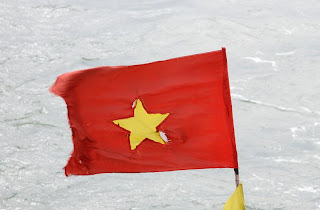 Vietnam is one of those countries that I never had a desire to visit before living in Okinawa. Since moving out here, I've heard all kinds of great things about it… the scenery is amazing, the food is so fresh, the city is so historic, everything is so cheap… etc. etc. Well, after visiting, I can say, yes, yes, yes and definitely yes!

We decided to combine Vietnam and Thailand in our big trip for the year, so we were only able to go to one part of Vietnam. Although Saigon is an interesting city, I was drawn to the historic feel of Vietnam’s capital, Hanoi. An even bigger reason I chose Hanoi: this is where Ha Long Bay is located – one of the places I’ve been dreaming of going since moving to Asia! Before flying into Hanoi, we had a decent layover in Shanghai, China, so we took the opportunity to get out of the airport and see yet another new city. We were hesitant about going, but we ended up hooking up with two other tourists who wanted to do the same thing - a girl from Germany and a man from Vietnam. Right out of the airport, we hopped on their high-speed train system that takes you into the city. It's called the Maglev, because it doesn't sit on the track or use wheels at all. It levitates using magnets, and it is actually the world's fastest train! It reaches about 430 km/hour and is as smooth as can be. It felt like we were in a plane, not a train! From there, we used the subway system to get to People's Square and Nanjing Road, which is the big, touristy street in downtown Shanghai. The shops and restaurants in this area were really nice, and we ended up eating dinner with our new travel friends at a big restaurant on the 7th floor of a mall type building. We ordered a bunch of dishes and all shared. The food was delicious and turned out to be pretty inexpensive as well. After dinner, we had time to walk down to the end of Nanjing Road to The Bund, which is a ritzy area along the river where you can get a great view of the Shanghai skyline all lit up. After seeing the skyline, it was time to make our way back to the airport. Unfortunately, it was raining that night, and it just so happened to be a Chinese holiday, so the streets were PACKED with people and umbrellas, which made it a little difficult to get back to the subway quickly. Well, we ended up making it back and getting onto our flight in time. I'm really glad we used our layover time to see the city - it was another fun experience and more great memories. 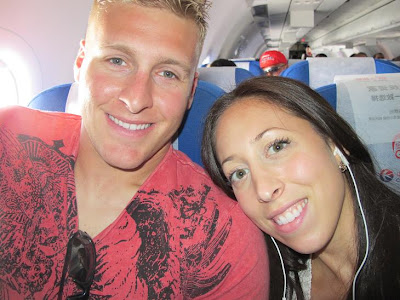 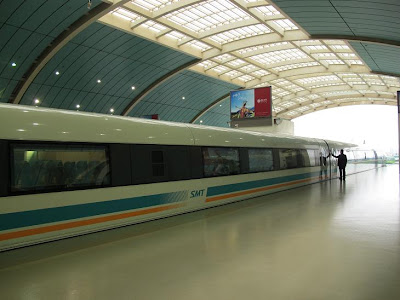 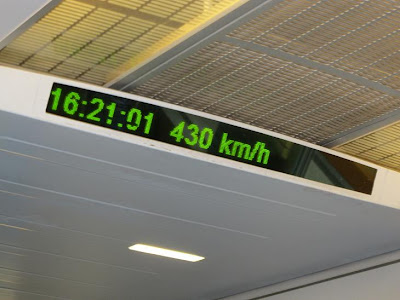 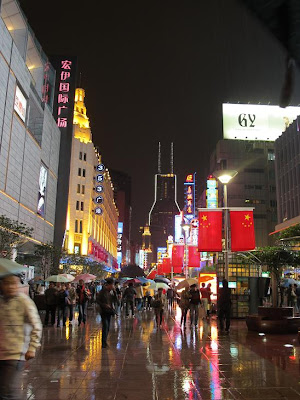 It was a sea of umbrellas 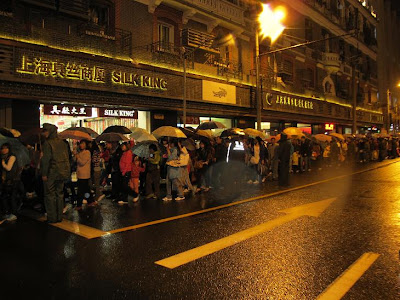 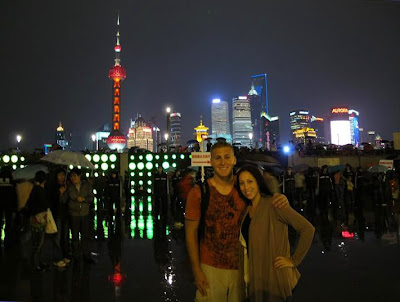 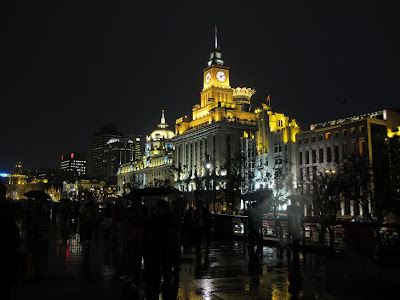 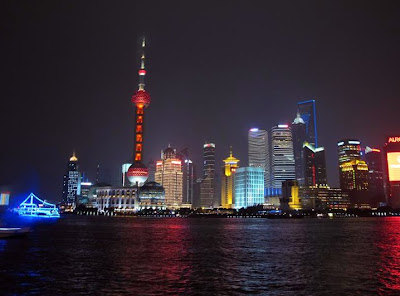 Bright and early the next morning, after arriving in Vietnam, we were picked up by our tour company and made the 3 ½ hour trek down to Ha Long Bay. I feel like we were always missing bad weather by a hair on this trip. Right after being picked up for the cruise, we were informed that a typhoon was coming and that we would most likely not be spending the night on our ship. Thank God the weather turned around and we were able to enjoy our 2-day, 1-night cruise on this incredible bay!

One thing we noticed about Vietnam quite quickly was the driving situation. I am not exaggerating when I say that I was fearing for my life most of the time we were on the road. We spent about half of our time driving in the opposite lane right into oncoming traffic! Only when the traffic got too close would we zip back over into our own lane for a moment. I’m actually not even sure why they have lanes painted on the road at all. We saw only about two working traffic lights the whole time we were there! Again, I’m not exaggerating – we’ve been to quite a few different Asian countries by now, and this was by far the worst I’ve ever seen!

Beautiful scenery on the drive down to Ha Long Bay 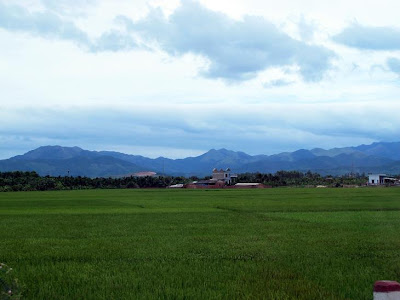 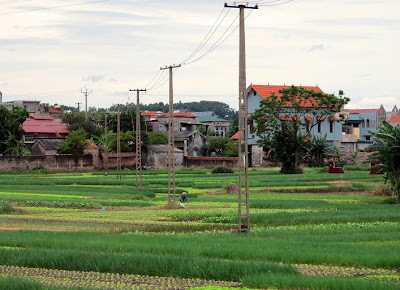 Somehow, we made it to Ha Long Bay, boarded our boat, and set sail into the limestone cliff-filled bay. The bay is filled with many other boats, all the same type as our’s – a modernized version of a traditional Vietnamese Junk. Our’s was called the Calypso Cruiser, and it was definitely one of the nicest out there. Ha Long Bay actually means, "Bay of Descending Dragons", describing the hundreds and hundreds of rocky outcrops that make up the scenery.

The cruise consisted of incredible sites, amazing food and drinks, and two days of relaxation! I cannot say enough great things about it, and I am so glad we spent the extra money on such a nice ship. I’ve been looking forward to seeing Ha Long Bay for so long now, and our cruise really made the whole experience special. The ship was large enough that we had plenty of space to walk around and enjoy time to ourselves, but there was also a great group of other tourists with us as well that we had the pleasure of getting to know – mainly from Australia. Our dining table consisted of Matt and I, two Australian women (mother and daughter), and a guy around our age from Singapore who spent the past ten years living in New York City. It was a lot of fun getting to know them, we even stayed up late talking and having a few drinks from the bar. Speaking of the bar, the accomodations on the ship were excellent! Our room was like a mini version of a 4-star hotel, the upper sun deck was so relaxing, and the dining room was upscale and had a very nice bar inside.

The food was nothing short of incredible itself. The chef was extremely talented - I feel as if he could have his own restaurant! Everything was not only delicious, it was all so detailed and carefully prepared with beautiful presentation. It was one of the highlights of the cruise, and we looked forward to each meal on board. 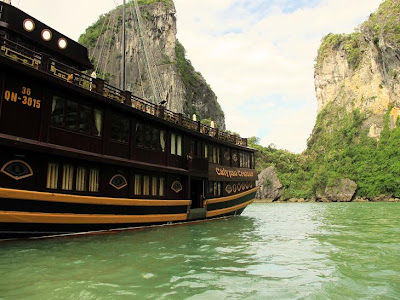 Our room on the ship 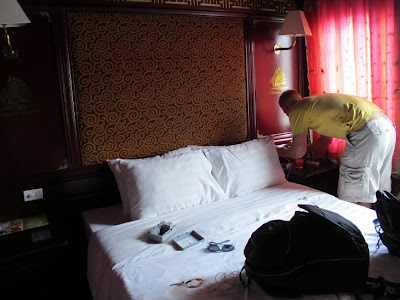 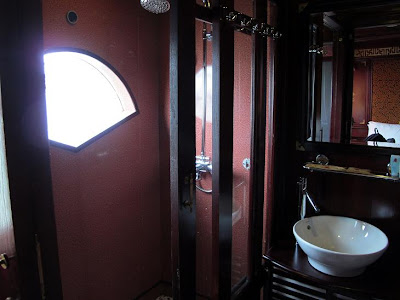 We had an itinerary while on the cruise, but it was so relaxed that we never felt overwelmed or busy. After boarding the ship the first day, we set sail through the limestone cliffs for a couple of hours. We ate lunch, and then were taken to a cave to get out and explore. After getting back on the ship, we had more relaxation time, a short cooking class presented by the chef himself, dinner and drinks. The next morning, a group of us woke while it was still dark to see the sunrise and do Tai Chi on the upper deck, however, it was raining out and the Tai Chi was cancelled. Fortunately, the weather cleared up and even got a little sunny out after breakfast. After some more relaxation time, we headed to Titop Island, one of the islands where you can climb up to the very top and get a panorama view of the bay. The rest of our second day consisted of lunch and more relaxation on the upper deck until getting back to the port in Ha Long City, where we boarded another death-bus and made our 3 1/2 hour drive back to Hanoi. This drive was even worse than the first if you can imagine. There were actually people (including Matt) yelling at the driver to slow down and stop driving so recklessly!
The cliffs are incredible, and they make you feel so small! 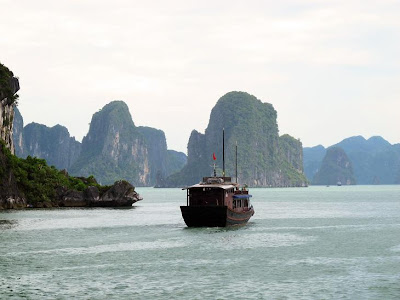 Check out this video clip of the view from our room on the ship: 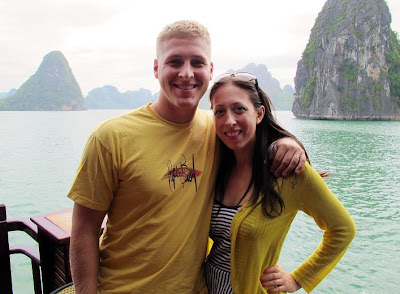 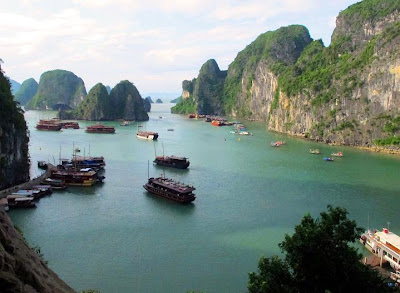 I LOVE the bright colors of these floating houses! 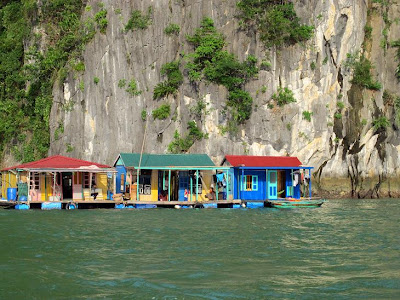 Sunset on the bay 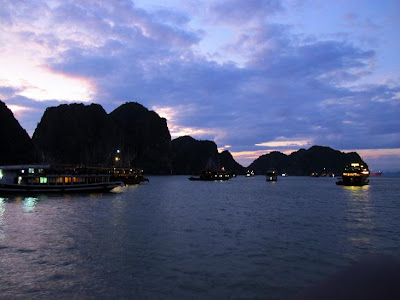 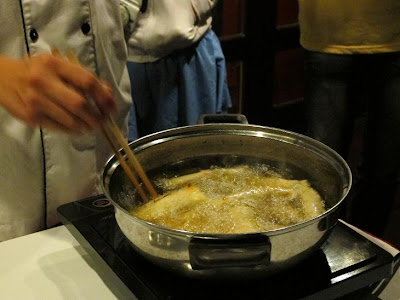 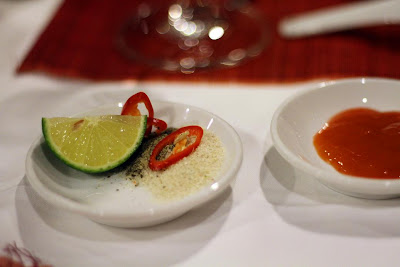 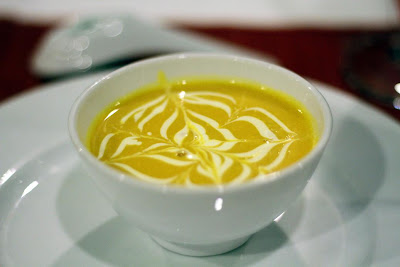 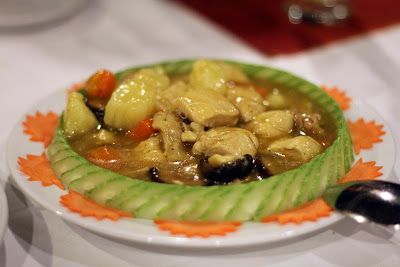 Next morning, relaxing on the sun-deck 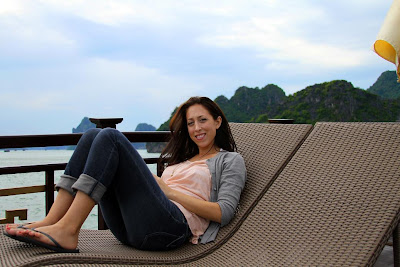 Before leaving Ha Long, they took us to Titop Island, where we climbed to the top for a panorama view of the bay. 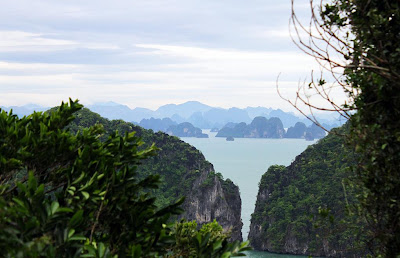 Memories we will have forever;) 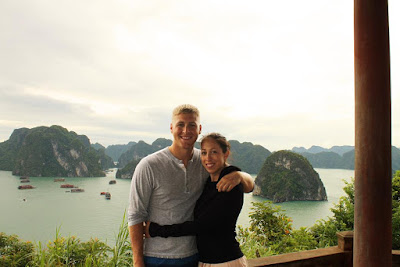 Stay tuned for the rest of our trip to Vietnam!