As I touched on briefly in my last post, I have been traveling a lot for work lately.  I was fortunate enough to get to visit a new country that I don't think I would have gotten to see if it weren't for my work trip: India.  By this point, I've really seen a lot of Asian countries, and it was really refreshing to see a country so different than what I'm used to.  With a layover in Shanghai, China, our total flight time to New Delhi (India's capital city) was about 9 1/2 hours long.  I went on the trip with another associate that I work with who has been to India before.  We decided to add a few days to the beginning of our Buy Trip and do some sight-seeing while there.

Our first day of the trip was spent visiting all the major sights around Delhi, which, for being the capital city, is otherwise not very remarkable.  It is a very poor and dirty city that really has no nice parts at all.  Our hotel, which was supposed to be in one of the nicer and safer areas of Delhi, was really one of the most run-down and sketchy hotels I've ever stayed in.  Luckily, we were only in Delhi for two nights and one full day.  During the day, we rented a cab to take us wherever we wanted to go, and we really did end up seeing some neat places and interesting architecture there. 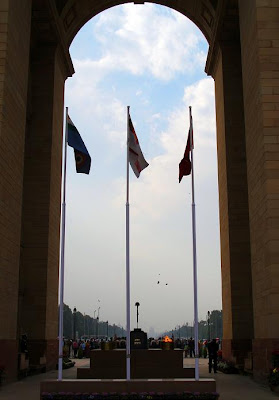 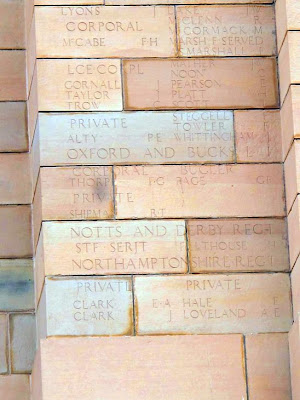 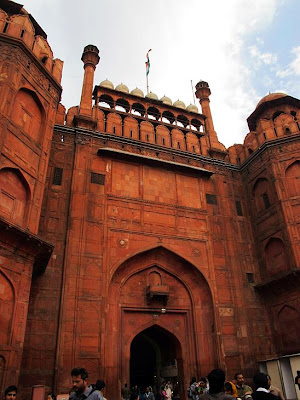 Check out this video clip of us walking toward Jama Masjid through their marketplace - there really was "Indian Music" like this playing everywhere we went in India! 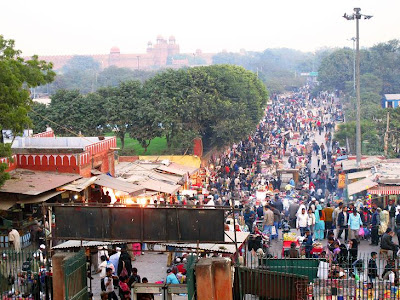 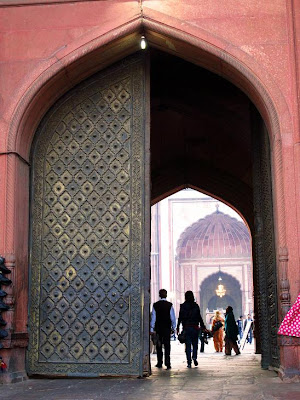 After getting the run-around at the Delhi train station early the next morning (Indian people can be very sneaky I've learned!), we got on our train and arrived in Agra a few hours later.  Priority: checking the Taj Mahal off my bucket list!  It was the most expensive thing we did on our trip (the admission was 750 Indian Rupees - about $15) but it was obviously well worth the money!  We were separated and put into a line for "foreigners", which I had no problem with, because the Indian line was about a mile long, while ours barely existed.  They are very strict about food inside the Taj Mahal grounds, and they do a frisking and search through your bag as you enter.  They took everything from me - my peanut butter and jelly sandwich, my crackers, and even my gum!  Fortunately, the guard didn't recognize my gummy bears as candy (she thought they were some sort of throat lozenge?) and let them pass:)

When I turned the corner and got my first glimpse of the Taj Mahal, I was speechless!  It literally takes your breathe away!  The sky was a bit hazy in the early morning, which made the building look like a flat painting, not real at all.  The gardens are beautifully landscaped and very peaceful and clean - thanks to the "no food" rule, no doubt.  As you walk closer and closer, the Taj Mahal comes to life.  There are so many large birds up near the top of the main dome that are constantly circling it and squawking - I felt like I was in the movie Aladdin the whole day!

Oh, and did I mention that we were celebrities for a day?  Oh, yes, I have never been stared at more or asked to have a picture taken with me more times in my life!  Ever!!  We spent a whole day at the Taj Mahal, and about every 5-10 minutes, we were asked for a picture.  It seemed like the Indian people were more interested in getting a picture with us than the Taj Mahal even!  Men, women, children, whole families!  One after another - no joke!  I personally thought that their fascination was a little strange, but they were all very excited... I'm sure we're in about two hundred Indian family photos!

Check out this video clip of the Taj Mahal as I was approaching: 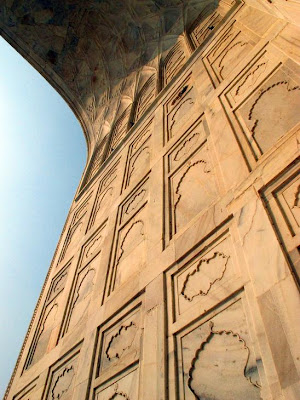 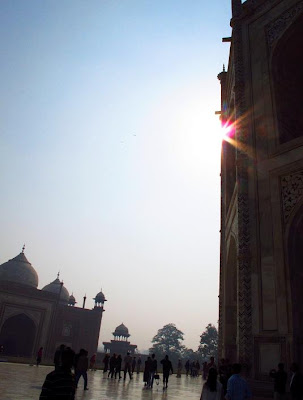 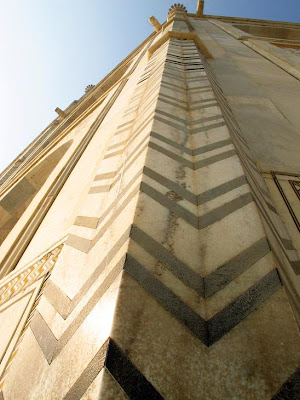 Check out this video clip inside the mosque: 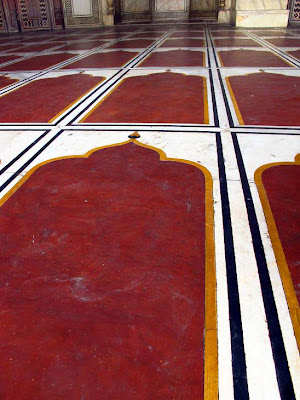 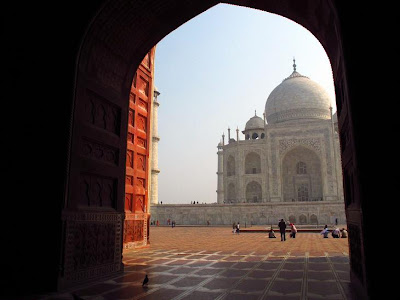 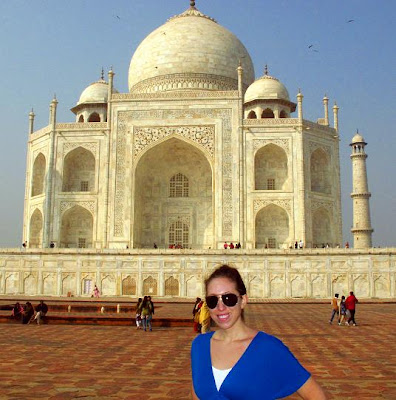 Agra was even more poverty-stricken than New Delhi was - unless you are inside the magical gardens of the Taj Mahal itself, you are in a vast land of dirt, garbage and nothingness. It was incredibly sad to see the poor families that live there, many in tents on the side of the road. After spending the majority of our day at the Taj Mahal, we hopped in a rickshaw that took us to see another old temple while we were waiting for our train. This was quite an experience as well, taking a ride down the streets of Agra.

Check out this video clip I took while riding through Agra on the rick-shaw - and yes, it was always this loud with horns the whole trip - I think India was the noisiest country I've been to!  And take note of the monkey that jumps into a wall in the beginning of the clip;) 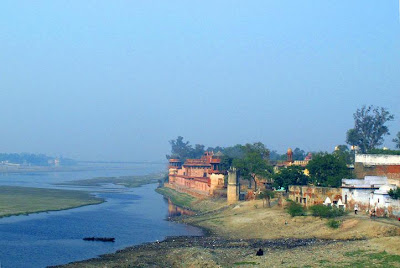 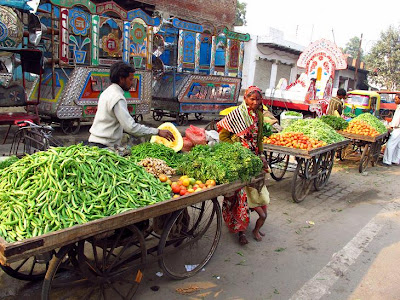 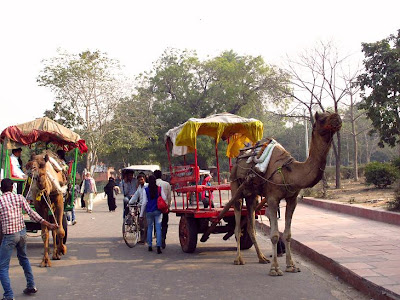 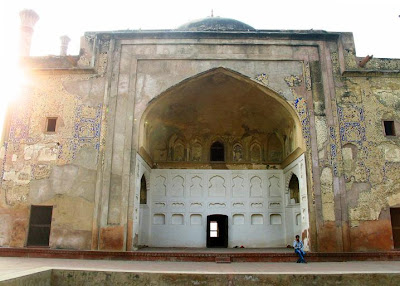 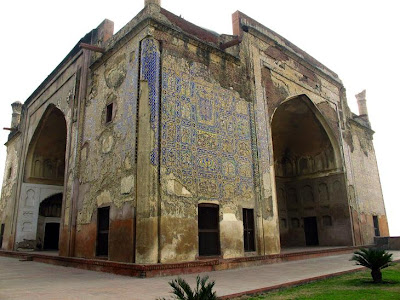 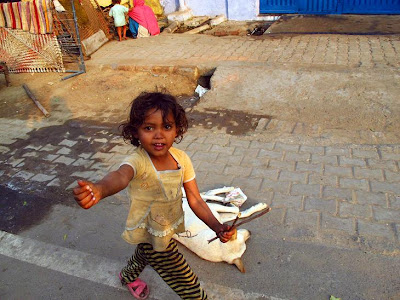 Our last stop was Jaipur, the city where we did our shopping for work.  Despite the fact that I had to work while I was there, I really tried to make the best of my time there and take in all of the sights, people, and buildings - even if some of them were just seen through a car window:)  Although my favorite site-seeing was in Delhi and Agra, I have to say that Jaipur was a much cuter city and it was my favorite city by far.  Even just watching it as we drove through was interesting to me.  The bright colors and level of detail on their old buildings was really beautiful! 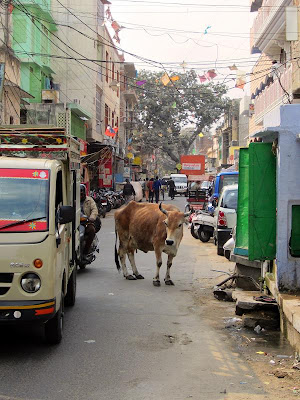 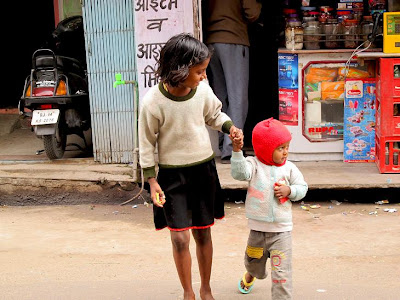 Check out this video clip of painted elephants walking down the street: 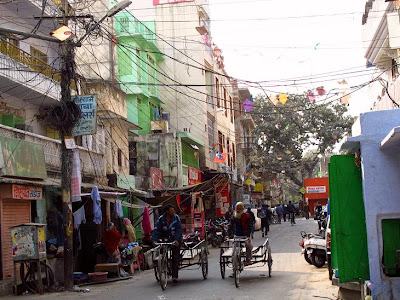 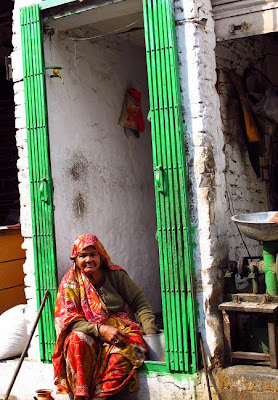 Check out this video clip of me crossing the street (and almost getting run over, by the way!) while shopping in Jaipur:

Despite the poverty and dirt, I genuinely liked India for being truly unique and a nice change of pace from all of the Asian countries I am used to seeing.  Fun architectural details, bright colors, monkeys and camels in the streets, the Taj Mahal... these things all made my experience what it was, and really overshadowed the negatives for me.  I love that the Indian people put that much detail into everyday objects, and I love that even in the poorest areas of the country, I was able to find beauty almost everywhere I looked.